My awesome friend Mary does my hair, and when we were talking about an upcoming publication of one of my poems, and another poem I’d just started about my daughter, she asked me, “Heather, when do you write, seriously?”

My response about the poem about my daughter might make some people laugh (I took a bathroom break to get my thoughts down on virtual paper, hoping to craft it later into something presentable), but the truth is more like this: All the time. Never. In my sleep. When I’m awake. At stoplights. Sometimes.

It was interesting that she asked me, because I’d just had a conversation with my MIL about how I wish I could just have continuous time to devote to my writing. But it’s not that simple, ever. I teach full-time. I have a husband, two kids, a dog, a cat, a fish, and a house. This is not to say that those who are able to write full-time don’t have other responsibilities, because I know they all do. This is just my version of the answer to that question.

So, for me, the answer to the question of “When do you write?” breaks down like this:

All the time: I’m a mental processor. I always have been. I am mostly quiet, and I do not “think out loud.” My brain is constantly turning things over and over and over and OVER in my head, churning through them until I finally have a “certifiable” thought about what I want to say. Mary refers to me as “a vault,” because she knows that what goes in usually never comes out unless I feel comfortable, or unless I’m provoked into actually speaking. I will admit, due to “resting bitch face,” my tendency to trust very slowly, and my introverted personality, does not happen the majority of the time. I shared this picture on some social media platform somewhere ages ago, because it really is such an apt depiction of how my brain works: 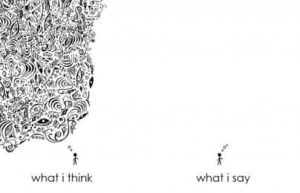 So, in my mind, even if I’m not actually writing something on paper or typing it into the app I use on my phone, I’m still engaging in the writing process. I’m still formulating thoughts, still thinking, thinking, thinking, about what it is I want to say, and how I want to say it. I’m not an outliner/planner, either. I put stuff down on in my app, or on paper, then mentally rearrange it, then physically rearrange it, and then BOOM I’m happy. Well, marginally happy, anyway, because LORD the struggle with impostor syndrome is still so very real.

Never: Some days, it really does feel like I never write. Sometimes, it’s intentional. I don’t want to mentally process what I already have or want to put down on paper. It’s not a subject I want to think about. I don’t want to reach back to that place in my mind, in my past, or even into my future. Other times, I don’t want to mentally process what it is I’ve reached back to in my memories, and so I drop it back where it came from and leave it there. I know I’ll come back to it another time (maybe. probably. most likely. could happen.), but on those days I don’t write at all, I accept where I am in the process of writing, thinking, and living. Tomorrow is always another day, and as I said above, everything is still going on in my head even if it’s stuck in there for a while before it makes its way out.

Sometimes: This is probably the most realistic response. This is the close relative of the “whenever I can” response, which could be during bathroom breaks (see above) or when I’m thinking about something and the stoplight turns red on me, or during passing period or lunch at work, or in the middle of the grocery store, when all I do is type a single sentence or phrase into my app, or write a single question or thought in my writing notebook. Here are a couple of things I “jotted down” while at a red light, and called #StoplightPoetry

There’s no music to soothe this savage beast,
Maybe only to drown it for a time
Or teach it to swim. #amwriting#stoplightpoetry

The day cracks open like an egg, all jagged edges and viscous potential. #amwriting #stoplightpoetry

Will they ever become something else? Who knows. The most important thing is that I’ve shifted from always thinking and never writing, to always thinking and writing when I can. Even if they’re not complete poems, or essays, or even complete ideas, at least I have those snippets written down, and at least I am processing what I want to say and how I want to say it…and I can say that I never write, or that I write all the time, or really, only sometimes.