I’m thrilled to take part in the release launch for Selene Castrovilla’s Signs of Life (Rough Romance #2)! Check out the the playlist she created for the characters in the book, and be sure to enter the giveaway below!

This is a playlist of songs that represent Joey, Dorothy, their relationship, and other elements of the Rough Romance Trilogy. It’s based on reading Melt, but it carries through Signs of Life, too. And, I think, Unpunished (Book Three) as well – even though I haven’t written it yet!

I didn’t come up with this list. More amazingly, Cammie Smith, the first teacher to teach Melt in a high school, came across a song and realized it could be Joey’s anthem. As an introduction to Melt, she played this song for her class, and then again after they’d finished reading the book. She asked her students to reflect on this as part of their journal assignment, and also to come up with song on their own. It’s amazing how powerful music is — that we can “see” characters through songs we identify with them, and feel the characters come to life. It’s really exciting that readers have done this with Joey and Dorothy (and even other characters as well!)

1. Epiphany by Staind – This is the song Cammie discovered. I’m so grateful she found it, and realized how perfect it is!

Some of the things students wrote:

“The song ‘Epiphany’ almost tells Joey’s story. It talks about his struggle and how he just wants to give up.”

“The lines Forget all things I should have said,” relate to when Joey breaks up with Dorothy.

“Having Joey to tie the song to really makes me understand the pain behind the lyrics. ‘But I know i’ll do…if the right thing is revealed.’ The image in the end scene of Melt ran through my mind when I heard and read those lyrics.”

“Hearing this song, I would say that it could be both Joey & Dorothy’s anthem. I am going to say that over all, it is Dorothy’s journal. They are looking for an out, but can’t find one. Just how I picture Dorothy will be in Melt.”

“Listening to this song following the fast paced ending of Melt, I immediately understood how this fit Joey’s anthem in life. The lyrics that continually appear are: ‘Cause it’s always raining in my head,’ and this perfectly fits Joey’s mental state of mind.”

“This song is well-written and delivers a message with a fairly powerful punch. It goes along so well with the novel which makes me love Melt even more…if that’s possible!”

2. I Gotta Go My Own Way – from High School Musical Two

Talk about the other end of the spectrum! But this shows how universal the feeling of these characters are.

The student writes: “Troy and Gabriella are very much in love, but due to current events that have taken place Gabriella feels that it’s best to break up with Troy, despite all of the feelings she still has for him. They say in the song, ‘We might find our place in this world some day,’ and that’s kind of how Joey is feeling about their situation.”

3. Thinking Out Loud by Ed Sheeran

A mushy one, clearly reflecting the good times in Joey and Dorothy’s relationship.

The student writes: “Throughout the song he is asking if his girl will love him through all the obstacles they will face. In Melt, Dorothy tells Joey that no matter what he or they go through, she will never leave and will always be there for him. ‘Take me into your loving arms.’ Dorothy’s favorite thing is to be held by Joey and feel safe. To me is Joey singing to Dorothy, and she reassures him of everything.”

4. Exit Wounds by The Script.

The student wrote: “This song is so perfect to describe almost every character in the book that it is insane. ‘Exit Wounds’ is all about the pain that loving and losing someone can cause you, It relates to Joey’s parents in a physical sense of love leaving scars and open wounds that take forever to heal. For Dorothy’s parents, it’s the wounds of a child that they feel has gone against everything they taught her by risking it all for a ‘bad’ boy. For Joey, it’s the pain that being with Dorothy brought him and with his dad…The song references self-medicating with drugs and alcohol which fits Joey’s character perfectly. For Dorothy, ‘Exit Wounds’ describes how painful love can be. It makes you crazy, and when it ends, it feels like the people you love have left scars and marks all over your body that can never be healed.”

5. “Your Guardian Angel” by The Red Jumpsuit Apparatus

I can’t share what this student wrote, because it reveals too much of the story. You’ll have to trust me that it’s quite poignant. It made me think!

The student wrote: “A song that I feel reflects Joey’s parents’ relationship is ‘Gravity’…it just trust represents the gravity of the father pulling his mother to him, and she, out of fear of the world, stays with him. ‘Though I can’t seem to let you go, The one thing I know is that you’re keeping me down,’ really show us the invisible and visible holds )emotional and physical abuse) that he has over her. helpless, both the singer and Joey’s mother stay in the endless orbit of corrupted love.”

The student wrote that she chose this song “to represent Joey’s mom. The song starts out with a woman lying on the floor thinking about what went wrong with her life to leave her feeling so empty, which I imagine as Joey’s mother lying on the kitchen floor wondering what went wrong in her marriage.”

The student wrote “…’The Hanging Tree’ would be my song to defend life, death, and the internal and external struggles that fight for each other. We live to live life with death rather than without. Without death we cannot live.” (She relates these feeling to the characters in Melt earlier in her journal entry. Certainly I think some of my characters take this fight to the extreme— namely, Joey and his dad. All of the characters do, in a way. Wow, this is making me consider them in a new light, too!

8, The Wizard of Ahhhs by Pentatonix featuring Todric Hall

The student wrote: “…this song follows along with the tone of the book. The beginning of the song is very happy just like the novel at Dunkin’ Donuts. Then the song goes to very intense talking about drinking…and becomes intense like the novel.”

Pretty interesting that both the song and the novel have The Wizard of Oz as a backdrop!

9. Hero by Family of the Year

The student wrote: “I had a hard time narrowing the song down to just one character because it speaks volumes to the novel as a whole.”

The student wrote: “I found this song randomly and thought it was perfect. ‘The Gift’ relates as the singer describes how the gift given was love and it set him free and thats exactly what Dorothy did for Joey.”

In conclusion, I want to mention how awesome it is that each student had his/her own opinions about what these characters were feeling and going through, and the songs they picked strengthened these feelings and images. This is what literature is all about — and music strengthens the metaphors. Read and rock on!

Based on true events, MELT is both a chilling tale of abuse, and a timeless romance. MELT will hit you like a punch in the face, and also seep through the cracks in your soul.

MELT is a brutal love story set against the metaphorical backdrop of The Wizard of Oz (not a retelling). When sixteen year old Dorothy moves to the small town of Highland Park, she meets, and falls for Joey – a “bad boy” who tells no one about the catastrophic domestic violence he witnesses at home. Can these two lovers survive peer pressure, Joey’s reputation, and his alcoholism?

Told in dual first person, Joey’s words are scattered on the page – reflecting his broken state. Dorothy is the voice of reason – until something so shattering happens that she, too, may lose her grip. Can their love endure, or will it melt away? 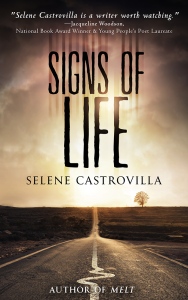 The tables are turned with a vengeance in this tour de force love story. Nearly a year has gone by and now it’s Dorothy who is fragmented and lost, while Joey keeps the promise he had made her to better himself—even though she’s gone. Joey talks about what is happening in the present while Dorothy describes what happened before— in the moments and hours after the Glock dropped. This time the stakes are even higher, as Joey forces himself to move forward while Dorothy is frozen in place. But when he learns of a devastating decision, Joey races to find her before it is too late. Truth, consequence, repercussion and modern medicine collide as pieces converge in this psychological, thrilling story, which begs the question: Can love really conquer all?

Selene Castrovilla is the award-winning author of multiple narrative nonfiction picture books and young adult novels. She holds an MFA in Creative Writing from The New School and a BA in English from New York University. She lives on Long Island with her two sons and too many cats. Visit her website: www.SeleneCastrovilla.com.

July 8th – Worth Reading It?

One signed set of MELT and SIGN OF LIFE (US Only)