In Tiffany McDaniel’s debut novel, she creates an allegory set in the small town of Breathed, Ohio, in 1984. Much is happening: scientists recently discovered AIDS; Apple revealed its Macintosh computer; astronauts walked among the stars; Marvin Gaye was killed; and Autopsy Bliss invited the devil to visit his town.

The devil does show up, invitation in hand, in the form of a young African American boy 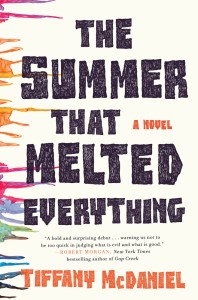 named Sal, who really would just like some ice cream, and he is taken in by the quirky Bliss family. Mom never leaves the house for fear of rain, Autopsy is a lawyer, Grand is a baseball star, and the narrator, Fielding, lives a broken life as he tells the story of Sal and Breathed through flashbacks.

Residents of Breathed first think Sal’s a runaway from another town, and then as strange things begin happening around town, some of the residents—lead by skeptical resident Grayson Elohim—form a church-like group whose sole aim is to bring down the young boy they have begun to think is actually the devil.

Fielding shares his memories of the summer of 1984, and reveals that he can’t let go of his past. He is full of regret for how he treated Sal, and for things he said to his brother. He says he fought in “the War,” and while he did not actually fight in a historical war, it’s clear he suffers from post-traumatic stress disorder. Everything he experienced during that summer changed him and made him a completely different man; the relationships he forms are few and fleeting.

As Fielding reveals the story of Sal and his effect on residents of Breathed, the parallels to Gabriel García Márquez’s story “A Very Old Man with Enormous Wings” also become clear. In the story, the titular old man falls from the sky, and the residents of the town circle around him, creating a spectacle of him, while they try to make him conform to their ideal of an “angel.” So it happens similarly in The Summer that Melted Everything. The townspeople, hearing that Sal claims to be the devil, immediately cast him as the villain in several unfortunate incidents in town, despite him not even being present in some cases.

The vilification of a young African American boy as “the devil” heightens the allegorical significance of the book, especially considering the consistent and repeated violence against African American men. The small-town prejudices in Breathed, as well as the outright racism and prejudice on display (toward homosexuality in addition to ethnicity) reveal the absolute worst things humanity is capable of, and those terrible tendencies have been amplified in the public eye in recent weeks. We still vilify people for the color of their skin, and stereotype, and try to make them “fit” into our idea of how people should behave. That sort of thinking is not only detrimental to society, but, as Autopsy Bliss cautions Grand after he uses a derogatory term for homosexuals: “No more words that say something about our own ignorance.” This book was a reminder and cautionary tale about how what we do to others reveals more about a person’s own ignorance than it does about the oppressed and stereotyped peoples. 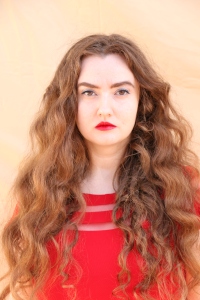 Tiffany McDaniel’s writing is inspired by the rolling hills and buckeye woods of Ohio, where she lives. The Summer That Melted Everything is her first novel.

Fielding Bliss has never forgotten the summer of 1984: the year a heat wave scorched Breathed, Ohio. The year he became friends with the devil.

Sal seems to appear out of nowhere – a bruised and tattered thirteen-year-old boy claiming to be the devil himself answering an invitation. Fielding Bliss, the son of a local prosecutor, brings him home where he’s welcomed into the Bliss family, assuming he’s a runaway from a nearby farm town.

When word spreads that the devil has come to Breathed, not everyone is happy to welcome this self-proclaimed fallen angel. Murmurs follow him and tensions rise, along with the temperature as an unbearable heat wave rolls into town right along with him. As strange accidents start to occur, riled by the feverish heat, some in the town start to believe that Sal is exactly who he claims to be. While the Bliss family wrestle with their own personal demons, a fanatic drives the town to the brink of a catastrophe that will change this sleepy Ohio backwater forever.