When you’re in high school, your friends are more than friends; they’re a safety net, sounding board, and sometimes even closer than family. That was the case for Carver Briggs and his friends Eli, Blake, and Mars…until he loses it all in a way he’d never imagined. 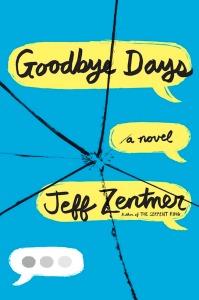 friendships, relationships, absence, guilt, and how much loss affects us both in the immediacy and also for the rest of our lives.

Carver Briggs has a pretty decent life; good friends, a good school, talent, and maybe a future as a writer. But one thing he wishes he’d never written is the text message that may or may not have ended the lives of his three best friends. This is no spoiler. In fact, the opening line of the book is, “Depending on who—sorry, whom—you ask, I may have killed my three best friends.” While the book revolves around this question of Carver’s culpability in the deaths of his friends, it centers more on Carver’s grief, guilt, and struggle to move on with his life. Of course it’s not easy for anyone to move on from such a tragedy, but what makes it worse is the compounded guilt he feels for seeing the families of his friends after they die.

Carver must ultimately answer the question of what it means to grieve through an all-encompassing shroud of guilt. For Carver, at the very beginning,

Everywhere he turns, Carver sees life without his friends, and also has to decide how he’ll exist in a world without them. One of his friend’s grandmothers requests a “Goodbye Day”—a way to spend one more day with her grandson, Blake, and to say goodbye to him in a way that allows her some closure. For Carver, it’s a way to say goodbye as well, and a way to learn more about his friend and his friend’s life.

The beauty of it is, the more Carver grieves, the more he learns about life and how to live it. He learns how his friends lived their lives, and how, in some cases, he knew so little about them. He learns that there is

“Life everywhere. Pulsing, humming. A great wheel turning. A light blinks out here, one replaces it there. Always dying. Always living. We survive until we don’t.

All of this ending and beginning is the only thing that’s infinite.”

From moments of introspection like this, and the lessons he learns about his friends’ lives, Carver begins to understand the meaning of what it is to live, and what it is to live with happy memories of love and painful memories of grief all at once. In therapy, he begins to learn to see that the two are not mutually exclusive—they can exist together to create the real and true memories of the people we love and, eventually, lose. His therapist tells him,

“Our memories of our loved one are the pearl that we form around the grain of grief that causes us pain.”

Thinking of life and memories this way, as pearls that we form from our memories, both sharpened and polished by grief, allows Carver the ability to move on from grief and guilt that are at times debilitating.

For a young man in high school, the effects of losing three anchors in life could reach far and wide. For Carver they do, and one of those lessons is how to live again. The lesson of how to live again was, for me, the crux of Carver’s story.

“Gorgeous, heartbreaking, and ultimately life-affirming,” says Nicola Yoon, #1 New York Times bestselling author of Everything, Everything and The Sun Is Also A Star, of this novel about finding strength and hope after tragedy. Perfect for fans of Me and Earl and the Dying Girl and Looking for Alaska and for readers of author Jeff Zentner’s own The Serpent King, one of the most highly acclaimed YA debuts of 2016.

Carver Briggs never thought a simple text would cause a fatal crash, killing his three best friends, Mars, Eli, and Blake. But now Carver can’t stop blaming himself for the accident and even worse, a powerful judge is pressuring the district attorney to open up a criminal investigation.
Luckily, Carver has some unexpected allies: Eli’s girlfriend, the only person to stand by him at school; Dr. Mendez, his new therapist; and Blake’s grandmother, who asks Carver to spend a “goodbye day” together to share their memories and say a proper farewell.
Soon the other families are asking for their own goodbye day with Carver–but he’s unsure of their motives. Will they all be able to make peace with their losses, or will these goodbye days bring Carver one step closer to a complete breakdown or–even worse–prison?

“One of the most stunningly heartfelt, lump-in-your-throat novels I’ve ever had the pleasure of reading. Hold on to your heart: this book will wreck you, fix you, and most definitely change you.” –Becky Albertalli, author of Morris Award winner Simon vs. the Homo Sapiens Agenda

“Tender, honest, moving, and lyrical. His characters live and breathe. Ahh, lucky me. Lucky us. Zentner is the real thing.” —Benjamin Alire Saenz, winner of the PEN/Faulkner Award for Fiction and Printz Honor winning author of Aristotle and Dante Discover the Secrets of the Universe 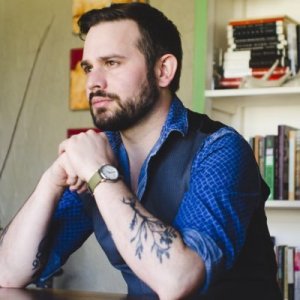 Jeff Zentner is the author of the William C. Morris Award winning book The Serpent King (2016) as well as Goodbye Days (2017). He lives in Nashville, Tennessee. He came to writing through music, starting his creative life as a guitarist and eventually becoming a songwriter. He’s released five albums and appeared on recordings with Iggy Pop, Nick Cave, Warren Ellis, Thurston Moore, Debbie Harry, Mark Lanegan, and Lydia Lunch, among others.

He became interested in writing for young adults after volunteering at the Tennessee Teen Rock Camp and Southern Girls Rock Camp. As a kid, his parents would take him to the library and drop him off, where he would read until closing time. He worked at various bookstores through high school and college.

He speaks fluent Portuguese, having lived in the Amazon region of Brazil for two years.