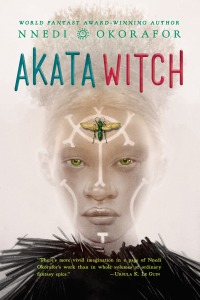 Twelve-year-old Sunny lives in Nigeria, but she was born American. Her features are African, but she’s albino. She’s a terrific athlete, but can’t go out into the sun to play soccer. There seems to be no place where she fits. And then she discovers something amazing-she is a “free agent,” with latent magical power. Soon she’s part of a quartet of magic students, studying the visible and invisible, learning to change reality. But will it be enough to help them when they are asked to catch a career criminal who knows magic too?
About Nnedi Okorafor:

Nnedi Okorafor was born in the United States to two Igbo (Nigerian) immigrant parents. She holds a PhD in English and is a professor of creative writing at Chicago State University. She has been the winner of many awards for her short stories and young adult books, and won a World Fantasy Award for Who Fears Death. Nnedi’s books are inspired by her Nigerian heritage and her many trips to Africa. She lives in Chicago with her daughter Anyaugo and family. She can be contacted via her website, www.nnedi.com.
And now for the giveaway! Click HERE to enter (and be sure to see the disclaimers below)!!

Enter for a chance to win one (1) of five (5) sets that include the paperback of AKATA WITCH and a galley of AKATA WARRIOR (ARV: $10.99 each).
NO PURCHASE NECESSARY. Enter between 12:00 AM Eastern Time on July 17th, 2017 and 12:00 AM on August 7, 2017.  Open to residents of the fifty United States and the District of Columbia who are 13 and older. Winners will be selected at random on or about August 5, 2017. Odds of winning depend on number of eligible entries received. Void where prohibited or restricted by law.