I am so excited that THIS RAGING LIGHT by Estelle Laure releases today and that I get to share the news!


If you haven’t yet heard about this wonderful book by Author Estelle Laure, be sure to check out all the details below.


This blitz also includes a giveaway for a finished copy of the book and a bottle of nail polish that matches the cover courtesy of Estelle, HMH, and Rockstar Book Tours. So if you’d like a chance to win, enter in the Rafflecopter at the bottom of this post. 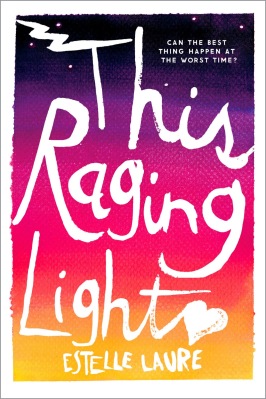 “A funny, poetic, big-hearted reminder that life can—and will—take us all by
surprise.” —Jennifer E. Smith, The Statistical Probability of Love at First Sight


Can the best thing happen at the worst time?

Her dad went crazy. Her mom left town. She has bills to pay and a little sister to look after. Now is not the time for level-headed seventeen-year-old Lucille to fall in love. But love—messy, inconvenient love—is what she’s about to experience when she falls for Digby Jones, her best friend’s brother. With blazing longing that builds to a fever pitch, Estelle Laure’s soulful debut will keep readers hooked and hoping until the very last page.

When Wrenny and I roll up the hill to Eden’s house in Mom’s ancient Corolla, Digby and his dad, John, are outside playing basketball, and I want to get in the house as fast as possible,because otherwise I might be trapped here all day, staring. I get a little twinge of something seeing a dad and his kid playing ball like dads and kids are supposed to. That’s a real thing, and my hand wants to cover Wren’s face so she can’t see all that she is missing. Which reminds me. “Wren.”
“Yeah?” She’s wiping at her shirt, reading a book on her lap, and she’s a little bit filthy, her hair greasy and knotty in spite of my efforts this morning. At some point the braids came out, and she’s reverted to wild.
“You know how Mom hasn’t been around lately?”
She stops. Tightens. “Yeah,” she says.
“Well, we don’t want anyone to know about that, okay?
Even Janie and Eden and Digby and John.”
“But Mom’s on vacation. She’s getting her head together. She’s coming back.”
“Okay, yes,” I say, “but still. We don’t want to tell anyone, because they might not understand that. They might get the wrong idea.”
“Like that she left us permanently?” There is so much more going on inside that Wrenny-head than I can ever know.
“Maybe, or at least for longer than she was supposed to.” I reach for the handle to the door because I can’t look at her. “Someone might think that.”
“She didn’t, though,” she says. “She’s Mom.”
“Of course she didn’t.” Lie.
“So who cares what anyone thinks?”
“Wren, just don’t, okay?”
“Okay.”
“Some things are private.” I open the door, then lean back across and wipe uselessly at her shirt with my thumb. “Like Mom being on vacation. So, okay?”
“I said okay, okay?” She gets out and waits, stares at me like I’m the most aggravating person on earth. “Hey, Lu?”
“Yeah?” I say, bracing myself for what’s next.
“Your mama’s so fat, she left the house in high heels and came back in flip-flops.”
I would tell her that I hate her new obsession with fat jokes, but I’m not in the mood for any dawdling, so I half laugh and get moving. I want to get inside and quick because there’s also the other thing. And by “other” I mean what makes me sweat just standing here. And by “thing” I mean Digby, who I have known since I was seven but who lately makes a fumbling moronic moron out of me, a full-on halfwit. Ask me my name when I’m in his presence and I’m not likely to be able to tell you. I’d probably just say, “Lllll . . . lllllllu . . .” and you’d have to catch the drool running down my chin.
I know. It’s not at all attractive.
But really. Tall, sweaty, and not wearing a shirt, so the muscles are all right there for the watching. He doesn’t exactly glisten, on account of the fact that he’s whiter than white, that he tans by getting freckles so he’s covered in them now after a whole summer outside. But seeing his hair all plastered to his forehead, his body so long and lean, looping around his dad to get the ball into the hoop, I want to fall out of the car and onto my knees in the driveway, say Lord have mercy, hallelujah, write sonnets and paint him, and worship that one little curve where his neck meets his shoulder that is just so, so perfect.
He is beautiful.
Which is why when he says hi as I pass him, I barely raise a pinky in response. There are two main problems here, aside from the fact that he is Eden’s twin and that’s all kinds of weird.
One, he’s had the same girlfriend since the dawn of time. They’re pinned, she wears his jacket, their marriage certificate is practically already signed. Angels bless their freakin’ union. And two, if I ever did get a chance with him, like if he ever kissed me or something, I would die of implosion. I know I sound like a twelve-year-old mooning over some celebrity, and not the extremely self-possessed woman-tobe that I actually am, but something about him makes me lose my mind. Something about the way he moves, about his himness — it shatters me all the way down. So I hope he never does kiss me. That would be nothing but a disaster. No one needs to see me fall apart like that. Least of all him.
Actually, maybe least of all me. 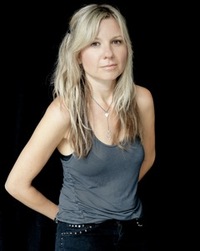 Estelle Laure is a Vonnegut worshipper who believes in love and magic and the power of facing hard truths. She has a BA in Theater Arts from New Mexico State University and an MFA in Writing for Children and Young Adults from Vermont College of Fine Arts, and thinks everyone should have to wait tables or work in a kitchen at least once in their lives. She lives in Taos, New Mexico with her children.
Website | Twitter |Facebook | Goodreads
| Instagram

1 winner will receive a hardcover of THIS RAGING LIGHT and a bottle of Essie Nail Polish that matches the book cover. US Only.