You know what’s funny about setting out to review a book you love by an author you respect, admire, and possibly fangirl over on Twitter? It’s kinda hard to do. I loved Deanna Raybourn’s Lady Julia Grey series, so much so that I 1) haven’t finished reading the last book yet because I don’t want it to end, and 2) feel a deep personal connection with Lady Julia Grey. So of course I love Veronica Speedwell and Stoker, and all of their adventures so far.

You can see where I reviewed the first and second books in the Veronica Speedwell series, 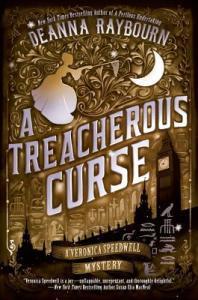 and of course I love this third installment. But there was something a little different about it. Both Veronica and Stoker seemed more aware of and attentive to the connection between them, but it played out differently than it did in the first two books in the series.

True to their characters, they were both in fine form again for this unraveling of a mystery that followed an expedition all the way from Egypt back to London. The stakes are higher for Stoker, and by extension, Veronica, as the two are effectively the 1800s British version of the Wonder Twins (though they are not, mind you, related).

Veronica, though, continues to expand on my love of Raybourn’s strong female protagonists. If Lady Julia Grey was my secret twin, then Veronica may well be my Patronus, especially when she says things like,

I knew exactly what a philologist did, but it had long been my experience that most men love nothing better than to talk about themselves, so I kept my mouth shut and my eyes wide as [a man] launched into a lengthy explanation…when he finished his monologue, I made suitable noises of appreciation.

Or when she takes charge of a tense situation and informs two men about to brawl that they must give her their shirts before getting into it. Best of all was when, upon encountering a woman who clearly likes to hear herself talk, she remarks to Stoker, “I thought she would run out of air by now, but she has rather impressive lung capacity for such an elderly person.”

In other words, there is no way on earth I would want to get on Veronica’s bad side—or Deanna’s for that matter. She could name a repulsive character after me and then the dejection would be unbearable.

For intricate mysteries and characters, banter that makes you chuckle, and a lead female character whom I’m sure has a resting b*tch face to top my own, look no further than Deanna Raybourn’s Veronica Speedwell mysteries. I already can’t wait for the next installment.

Members of an Egyptian expedition fall victim to an ancient mummy’s curse in this thrilling Veronica Speedwell novel from the New York Times bestselling author of the Lady Julia Grey mysteries.

London, 1888. As colorful and unfettered as the butterflies she collects, Victorian adventuress Veronica Speedwell can’t resist the allure of an exotic mystery–particularly one involving her enigmatic colleague, Stoker. His former expedition partner has vanished from an archaeological dig with a priceless diadem unearthed from the newly discovered tomb of an Egyptian princess. This disappearance is just the latest in a string of unfortunate events that have plagued the controversial expedition, and rumors abound that the curse of the vengeful princess has been unleashed as the shadowy figure of Anubis himself stalks the streets of London.

But the perils of an ancient curse are not the only challenges Veronica must face as sordid details and malevolent enemies emerge from Stoker’s past. Caught in a tangle of conspiracies and threats–and thrust into the public eye by an enterprising new foe–Veronica must separate facts from fantasy to unravel a web of duplicity that threatens to cost Stoker everything…